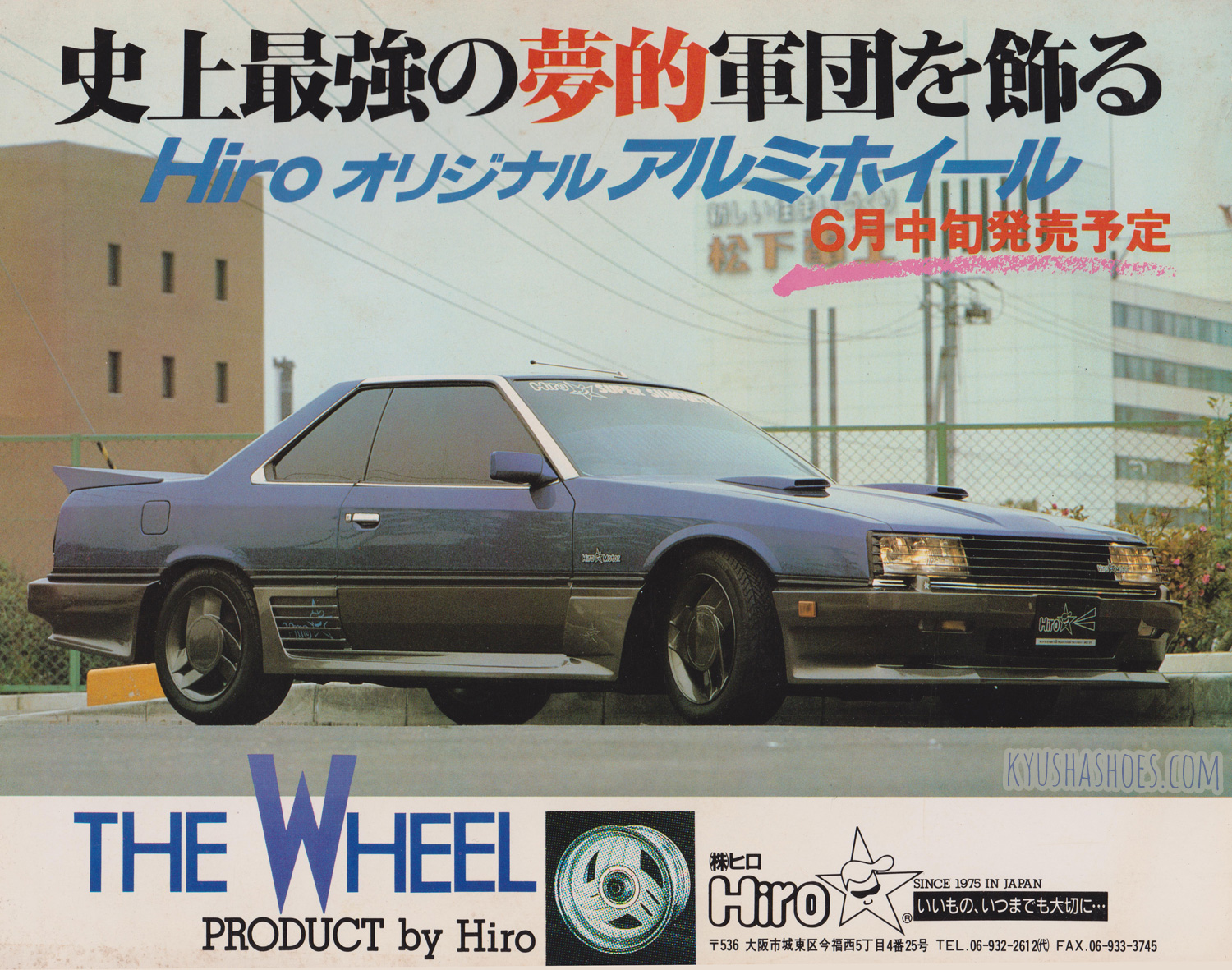 With a logo showing a star wearing shades and a rizento cut, Hiro Engineering has always been a symbol for hardcore shakotan style.  Originating in 1975, and with kenmeri Skylines fit with their body parts ruling my dreams, I imagined that wheels had always been a part of their product line.   That’s why I was surprised to find, on the back of an Auto Maximum Tuning catalog printed in the companies tenth year (July of 1985), this preview advertisement for the first Hiro Engineering wheel.

It’s a bit unclear to me which June they are referring to, but given that the magazine is a July issue, I’m inclined to think that they are looking forward to June 1986, putting this ad eleven months ahead of the wheel.

Given that fact… we can excuse the fact that the R30 Skyline pictured is wearing ANOTHER COMPANY’S wheels.

Yes, take a good look… the car pictured is wearing a full assembly of Hiro body parts, but is not wearing Hiro shoes. Instead it sports a set of black Heroes Racing iSpeed DD.  Heroes Racing… Hiro Engineering.  Don’t let a name that looks similar fool you.  These are two unrelated brands.

Unrelated brands… but as asymmetrical split three spoke aero wheels, the two wheels do actually have some commonalities. Still, it seems a little surprising that Hiro was so desperate to advertise the new wheel that they did it before they could even get one on a car.

At this point the new wheel didn’t even have a name… the ad refers to it as simply “The Wheel.” 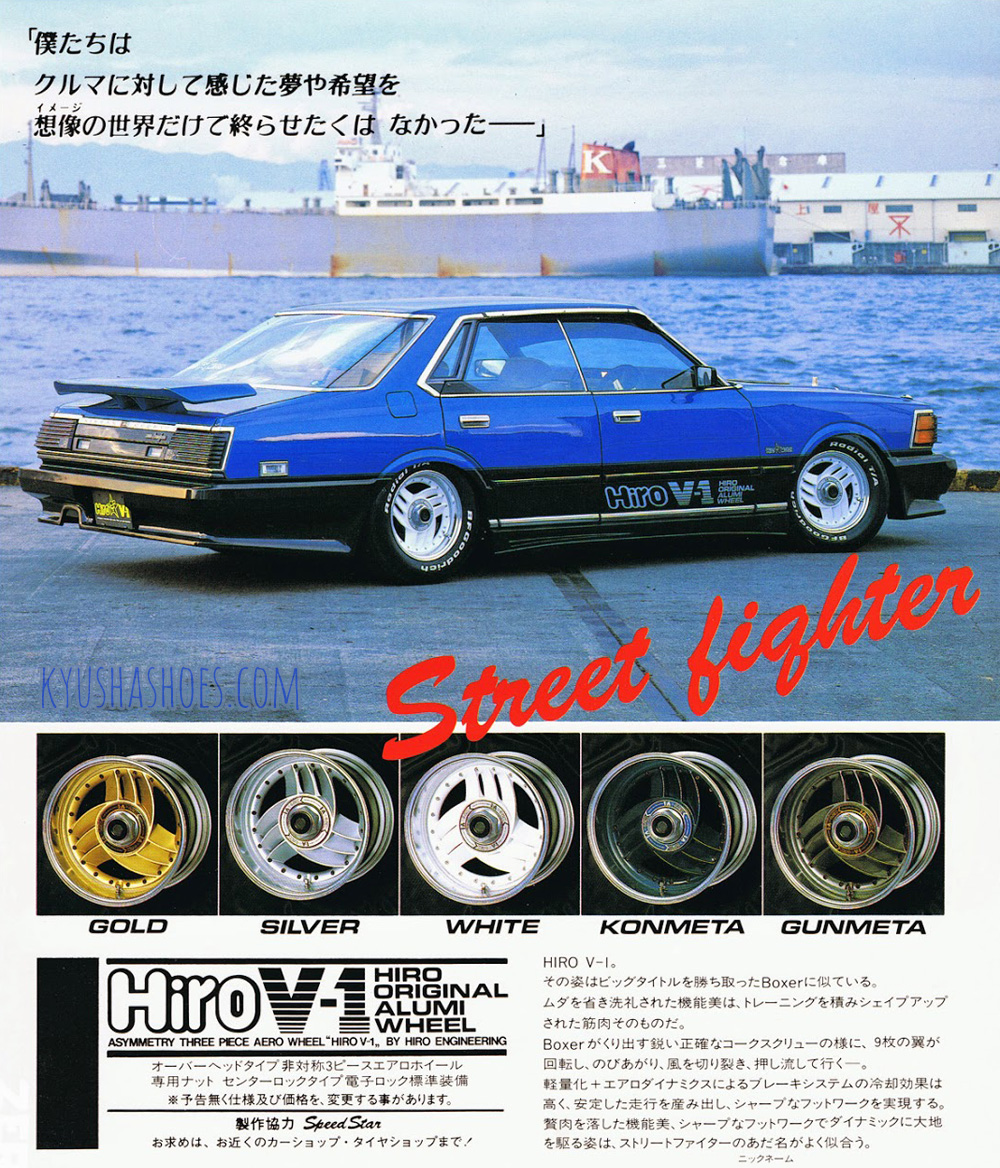 However, five months later in a Holiday Auto catalog, Hiro had these issues sorted. Now named the  V-1, Hiro’s The Wheel, was ready for consumption.

They were even pictured on a car as they should be: in this case a 430 Cedric that was again clad in all that Hiro was best known for until that point: wildly aggressive FRP aero add-ons.  With white-walled Radial T/A’s and an abundance of chrome trim, the car shows a “yankee” style you might expect from an Osaka based tuner.

Whether or not that look suits your taste, Hiro is probably worthy of being called one of the most interesting and influential Japanese car stylists of the eighties.

“We did not want to end hopes and dreams felt for the car in the world of imagination.”

As the ad indicates, Speed Star did the manufacturing work, using three-piece construction and including their magnetic locking centre caps to really put an exclamation on the fact that the product was were ultra-high end, and true to the aesthetic style of Hiro Engineering.  This was no boy-racer wheel with the soft white or bright pastel colouring that was so trendy at the time.

“It’s appearance is that of a boxer who won the big title. Like a trained a sculpted muscle, it is shows function and beauty. This boxer, with nine wings rotating, is a sharp and precise corkscrew that erupts, cutting the air and stirring the wind before deftly evading.  With lightweight, and aerodynamic effects that add brake cooling, it produces sharp and stable footwork. Extravagant function & beauty,  sharp footwork that propels it across the earth, the nickname ‘Street Fighter’ is well suited.”

Just as the company’s body parts did, Hiro wheels had a style that was generally a bit over the top.  And like those aero parts, the V-1 as well, was designed to harness the power of air to improve vehicle performance.  With unique left-sided and right-sided wheels, curved spokes pulled air outwards from inside the wheel well when the vehicle was in motion, cooling the brakes and helping to provide aerodynamic stability.

It’s a concept that was at play in motorsports at the time, and thus was a philosophy fitting for an aero-tuner to undertake.