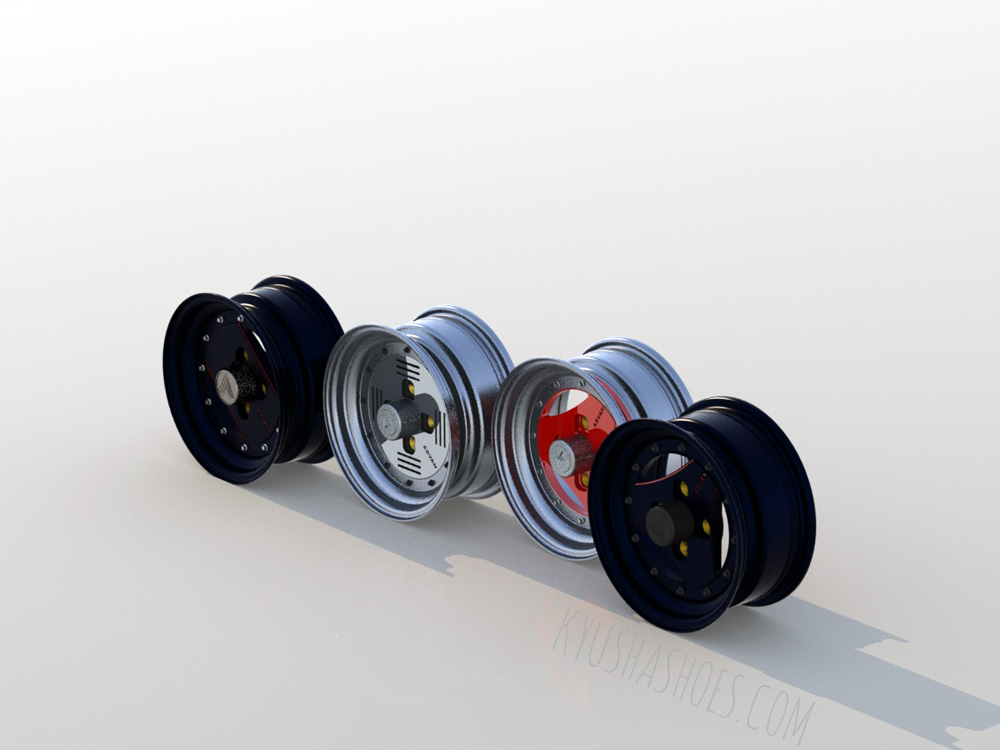 Once again we are back to this quartet.  If you’ve been visiting this site for a long time, you will know that I am obsessed with the original Advan 3-piece series of wheels.  Having owned all four, I am quite familiar with all of them.  Oddly though, instead of satisfying my curiosity, that experience only further reinforced my obsession.

That obsession is why… now five years since I sold off my last set… I’m using the singles that remain in my garage to digitally catalog the designs.

When I purchased all four, I had it in mind that I was going to run a different one on each corner of my car.  There was terrible disappointment when I discovered the A3D used a front-mounted center instead of a sandwich mount like the other three.  Six extra mm of offset ruined my dream. 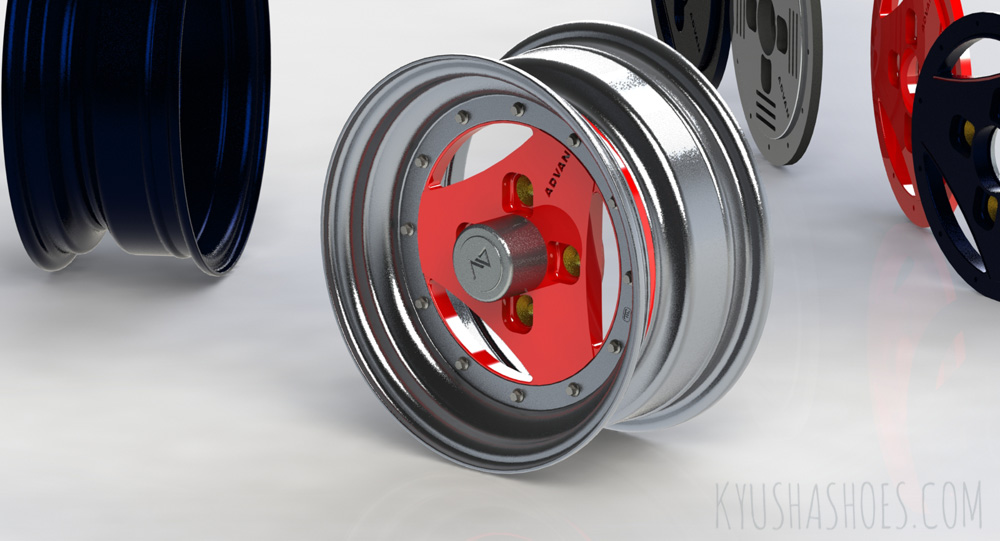 Still, in my eyes, they are the four greatest wheels that Yokohama has ever produced.  Signifying unique aesthetic possibilities, the flexibility of modular construction, and a true racing pedigree, they are basically all that Kyusha Shoes is about. 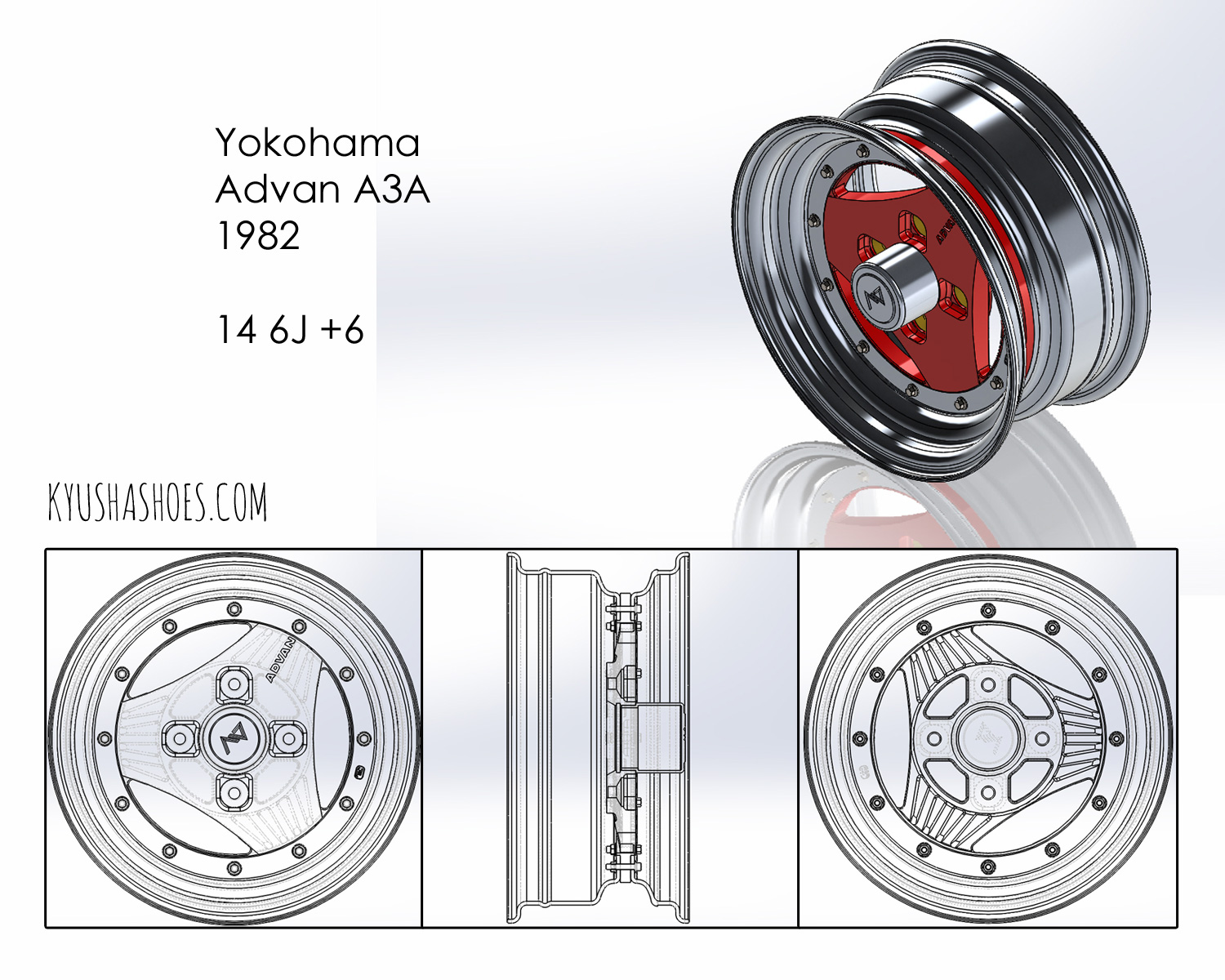 The A3A was the first of the series. Launching in 1979, it was an instant hit with road racers who often used tires from the same company.  As Yokohama’s first three-piece wheel, the parts used by it formed the basis for the whole A3 line-up and were also used by the company for a few Almex and BRX branded products.

The now-famous, twelve bolt shells came in 13, 14, and 15″ diameters.  Similarly constructed center sections meant that there were many shared sizes between the wheels that used them. 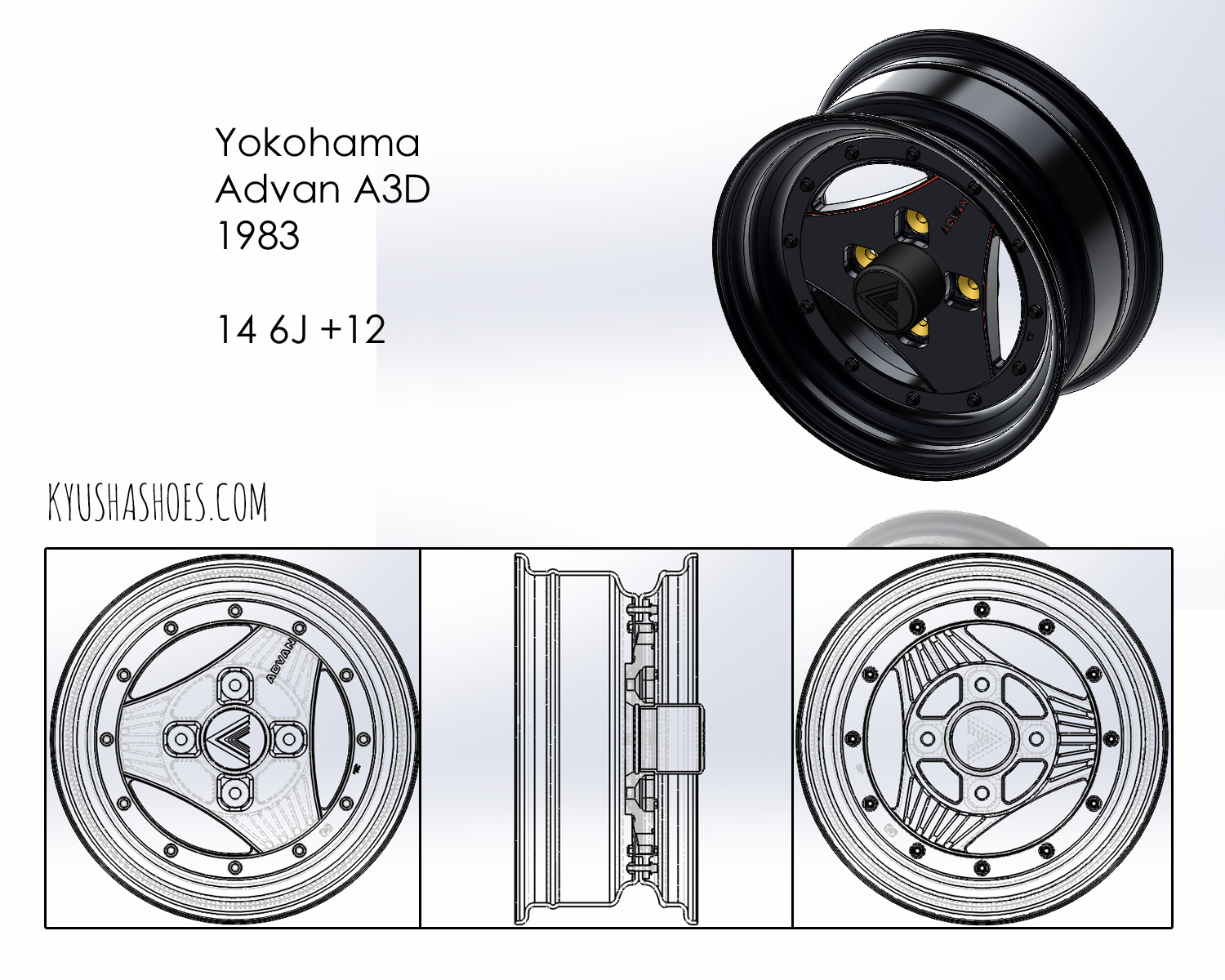 Except for the A3D, which I already mentioned placed the center section on top of the shells rather than between them.  That center was only a slight variation of the A3A’s center.  A groove was cut into the perimeter of the spokes and painted red, and the overall diameter of the piece was trimmed slightly to fit the center inside the outer shell rather than behind it.

The front-mounted (or “overhead mounted” as Yokohama called it) center makes the A3D unique from the rest of the line-up, but it is a trait shared with other Yokohama 3-piece wheels of the era, like the BRX BR-1 and Almex Y3B. 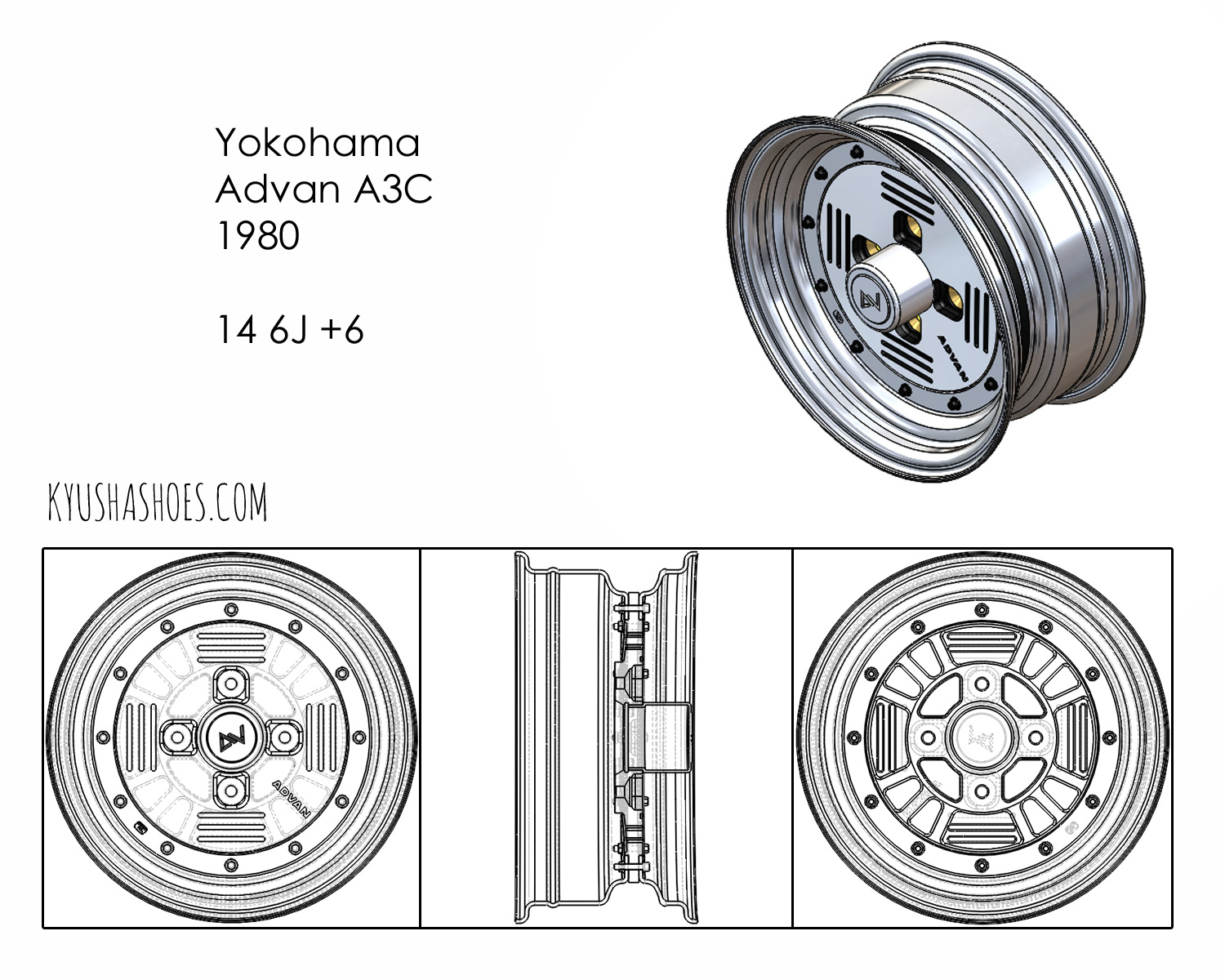 The A3C is generally considered the black sheep of the group as a dish type design versus the spoke-style of the other models.  Yokohama treated it uniquely, offering only two sizes for the model: 13 6J +6 and 14 6J +6. The other three wheels in the series were available in a much broader size range. 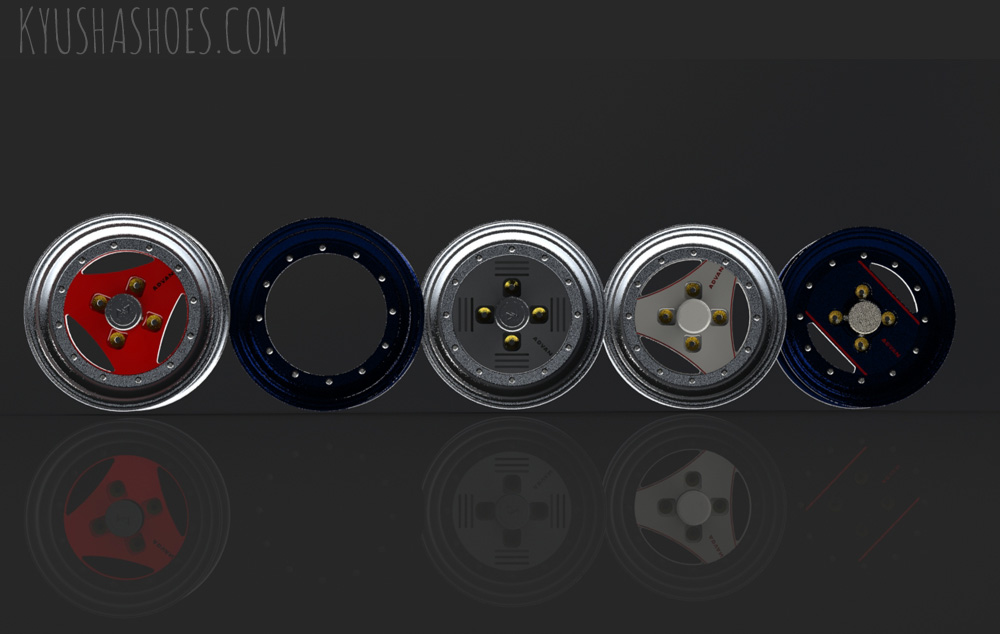 The A3C was actually the second wheel of the line-up, debuting in 1980.  Why Yokohama decided to skip the letter B, and go straight to C, is a mystery that is still to be solved.  Surely Japanese logic would dictate that there is an A3B somewhere… 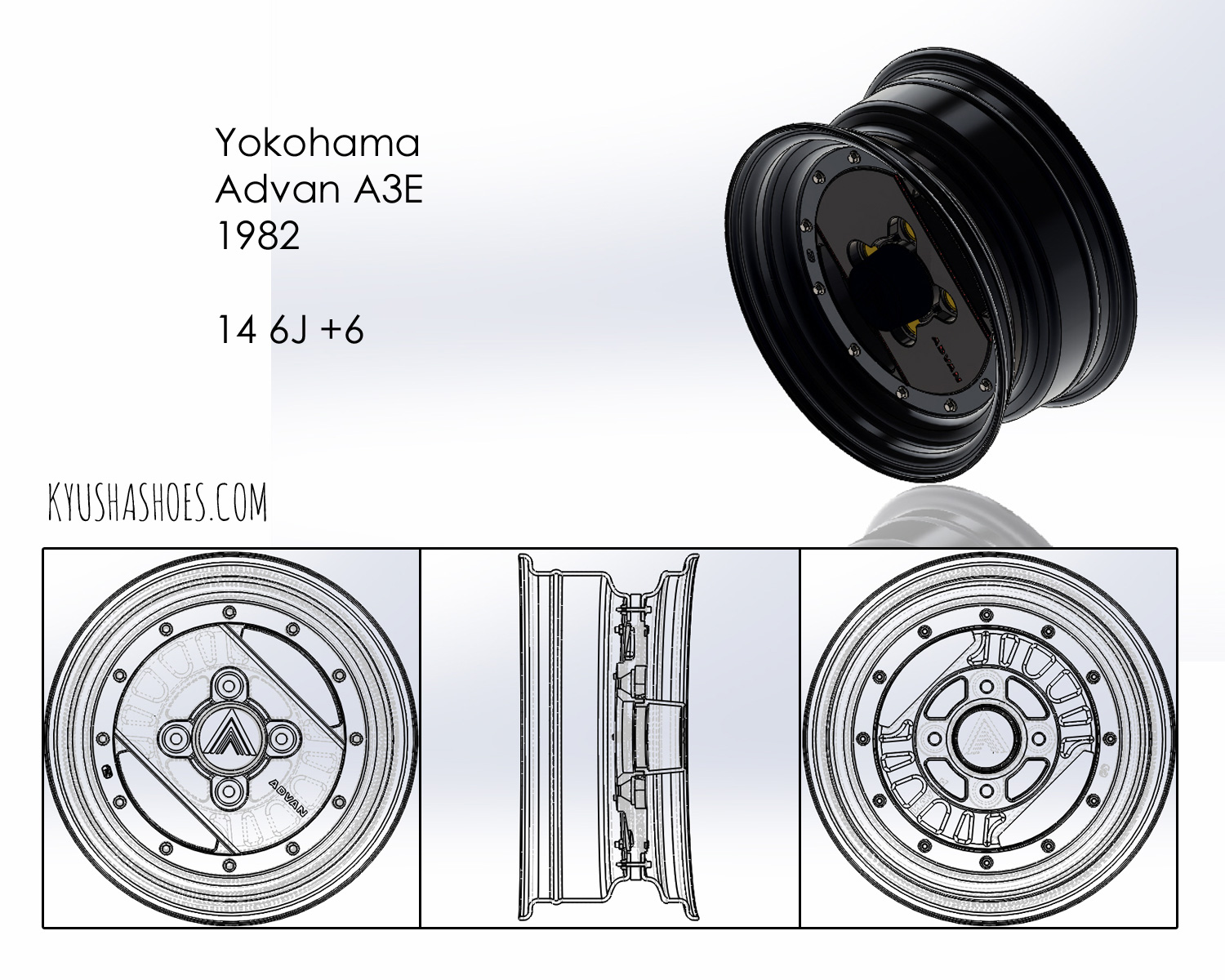 The final model from the line-up was the A3E.  Despite an appearance that many consider downright ugly, it is the most unusual and sought after.  With only two years of production (1982 and 1983), it is also the most challenging to find.

Now 35 years later, the allure of these wheels is still immensely strong. The A3A proved to be not only the first member of the series but also the most popular.  It stayed in production until 1998 – a long enough span of time to ensure the supply today remains plentiful. Good thing, as it is still very popular. The other three models were gone ten years earlier or more, and are now fading from existence.  Standing alone, these other three would be intriguing wheels, but for me, it is their connection to the A3A that really makes them stand out, as sort of limited versions of one of the greatest wheels of all time.