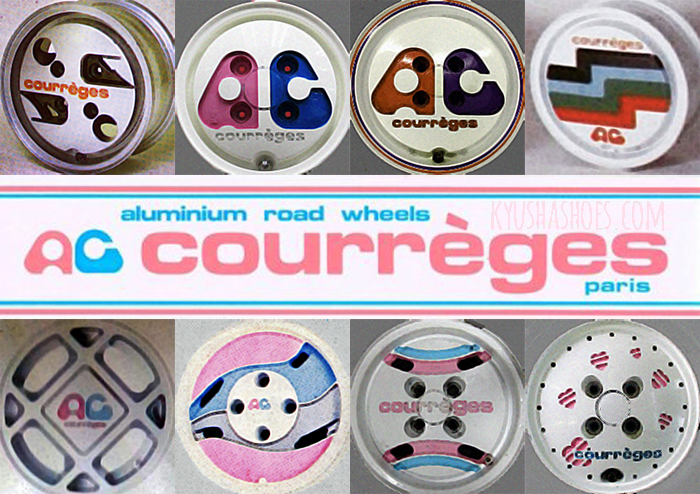 The recent death of Andre Courrèges renewed my motivation to complete the entry of his wheels in this database.  Now having done that, I feel inclined to comment further. The eight wheels pictured above represent the full Yamaco Courrèges line up from 1984.  From top to bottom left to right: sing your A-B-C’s in French:  ACA, ACB-P, ACB-R, ACC, ACD, ACE, ACF and ACG.

Since having interest in wheels at all, anything with the Andre Courrèges AC on it, has had my attention. In the early eighties, Mr. Courrèges himself, was thought to have an eye for futuristic design and flare.  Best known for fashion and clothing, he personally had great interest in automobiles. To this day, the company still dabbles in automotive design. Andre Courrèges died just a little more than one month ago of Parkinson’s disease, on January 7th 2016.   We can remember him as the visionary who brought us go-go boots and mini-skirts.  We can remember him as the man who brought us perhaps the most unique kyusha wheel line up ever. 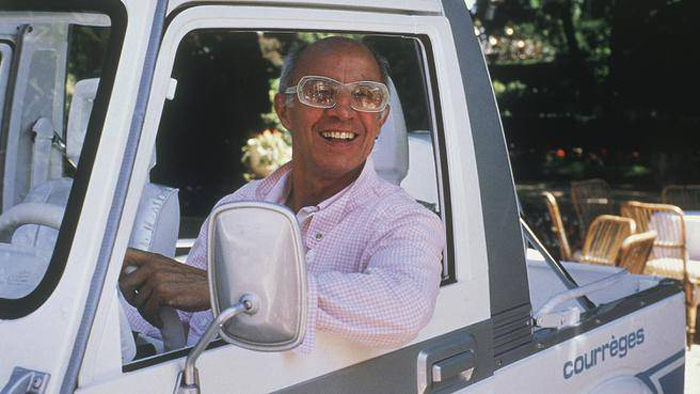 Andre Courrèges in 1986 in his personally styled Suzuki Santana S410.

Produced in collaboration with Yamaco more than 30 years ago, today it is hard to see any of the futurism that Courrèges designs were so well known for.  There is however,  certainly something timeless about their unique style. I am totally in love with them, and may have decided that the Courrèges wheel line-up represents everything that is awesome about kyusha shoes.

WHEELS… BUT NOT WHAT YOU THINK WHEELS SHOULD LOOK LIKE.
A wave. Hearts. Lattice. Zig Zags. Colored lug nuts.  There ain’t no five spokes or conventional mesh here.  The whole Courrèges line up is down right weird…. but what else would you expect from the company that brought you these?. 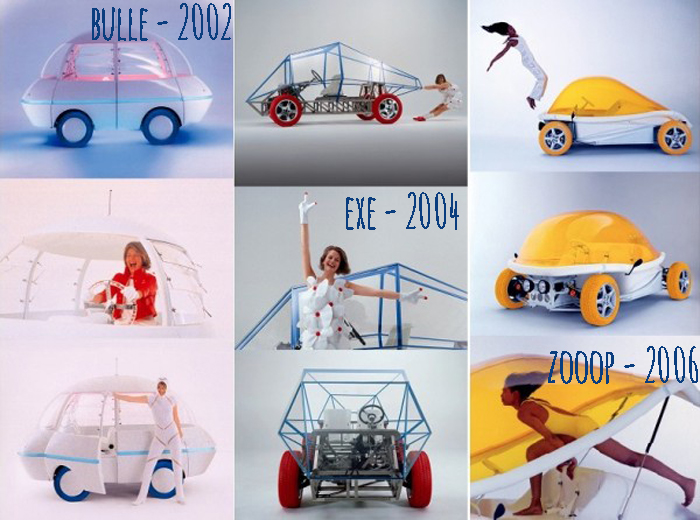 Cars, but not what you think cars should look like: the Bulle, Exe and Zooop.  Yah they’re all real.  Yah those numbers beside them correspond to the development year.  You gotta respect Courrèges for sticking with a concept that I’m certain was designed and drawn up before any car on the road today was created, and finally made a reality 50 years later.  No wonder in 1983 they were able to so boldly put their name in pink and blue on wheels that looked nothing like any wheel produced prior.

MYSTERY AND INTRIGUE.
Tracking down Courrèges wheel info has taken quite a long time. I have only ever seen three of the eight models in market places, and those same three in various catalogs.  They are the ACB (Pink & Red) and the ACF and the ACG.  Given logic, I assumed that left at least three wheels to discover: the ACA, ACC, & ACE.  Thank you to those who steered me in the right directions.  I was not disappointed by what I found.  In the end, this advertisement from 1984 put it all together for me.  タナカーさんありがとうございます。(If only we could solve the mystery of the Advan A3B). 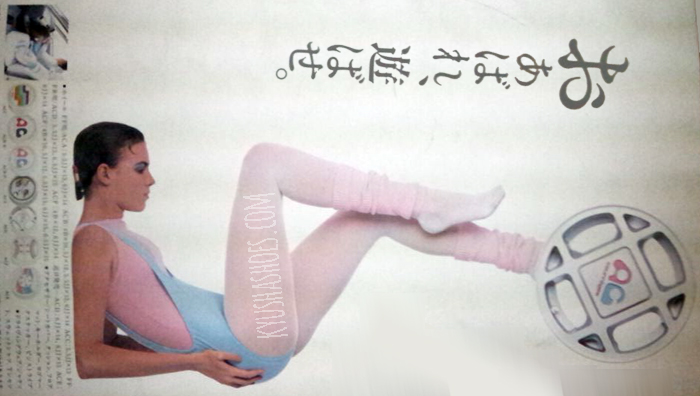 The Courrèges wheels themselves were produced and sold by Yamaco Corporation. In its early years, Yamaco had a very close relationship with Enkei, and together a collaborative wheel line called “Silver Star”. From 1968 into the mid eighties, Enkei did the metal work, and Yamaco looked after marketing and sales of Silver Star wheels.  Unlike the Silver Star line up however, which has Enkei (and no Yamaco) markings on hub pads, the Courrèges line-up looks to be all Yamaco. 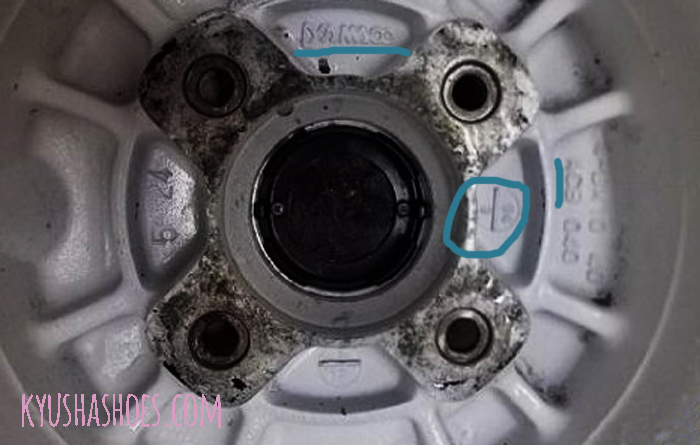 Now, given that date and other production markings on these wheels are still very Enkei-esque, we might wonder… Had Yamaco finally developed it’s own production facilities by 1983 and did it simply adapt some of Enkei’s practices? Or were these wheels in fact manufactured by Enkei, and pink and blue was deemed too much of an embarrassment for the good Enkei name.  Probably neither. It’s all part of the mystery…

PERSONALITY AND STYLE
A lot of the time what sells wheels is smoking tires, fancy construction techniques, and the promise of low laps times. Courrèges wheels have nothing to do with those things.  Tag lines from advertisements read: “Go Crazy, Have Fun!” “It’s My Thing! Courrèges Auto.” “Wheels featuring futurism and poise!” 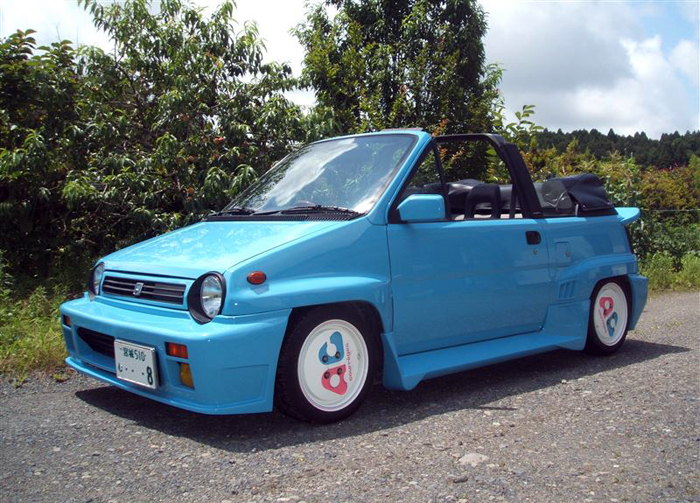 With no racing or performance aspirations, available sizes of the Courrèges wheels were quite mild.  14 6J was the biggest they came, and most models were available in 10″ diameters.  The target demographic was women who owned Kei or other small cars, and many of them probably owned other products featuring the same “AC” on them. Courrèges was a popular clothing brand at the time, and also sold bags, jewlerry, sunglasses and other accessories.

Yamaco Coporation also, was in the business of more than just wheels.  It produced hop up parts and car accessories for the masses.  In addition to Courrèges wheels, Yamaco had decal packages, pink or blue keys, trinket type interior dress up parts, and scooter accessories with the AC logo on it. 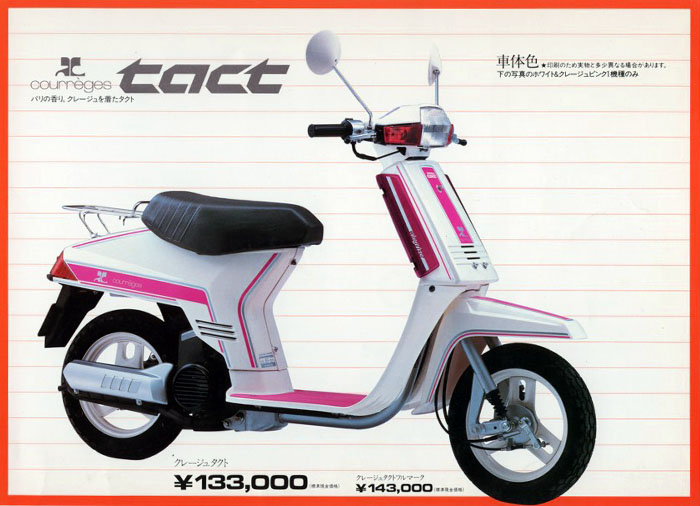 Courreges partnered up with Honda in 1983 to develop the Courrèges Tact scooter.

In 1986 MSRP for 12″ sized Yamaco Courrèges wheels was 23500円.  That is on the lower to middle range of the price scale for the time.  Now, if anything, the wheels have appreciated.  Nice sets can sell for more than 100000円, and now they appeal to old car lovers both male and female. Courrèges wheels are some of the most talked about kyusha wheels on Japanese BBS, and a frequent topic of inquiries that come my direction as well. Hopefully this will answer some of those questions… and maybe help bring some of the models that at the moment seem to be unobtainable, out into the open.

At the same time however… Now, I think there might be just enough pink and blue on this website to last me forever.

One thought on “A Courrèges Wheels Tribute”