If you have spent any time here at all, you have probably figured out, that I’m a huge Yokohama Advan honk.  Yokohama makes some of my favourite wheels in both the eighties and nineties as part of their Advan line up.  The Yokohama Almex line up however, is something that I’ve done pretty well to ignore.  By some standards, Almex wheels are considered bland or even ugly.  Sizing options are mild at best.  Until recently, there have been so many of them in marketplaces that sorting through them to find wheels you actually wanted has been a nuisance.

But that’s all part of the fun of Kyusha Shoes.  The Almex line is slowly disappearing.  My personal tastes are evolving.  And as I have become more learned about the Japanese Wheel League, I have discovered some unique shoes within Yokohama’s first wheel line.

The line launched originally in late 1974 with four wheels: the YSA, YSB, YDA and YMA.  Thanks to Tanaka-san for sending in some resources, including this advertisement from 1976 that shows an expanded line-up two years after launch.  I’ve taken the time to translate text to English… and that text give a bit of a sense as to the state of the wheel in the mid seventies.

In wheel design, Yokohama has never been ahead of the game, but it’s a bit surprising that they are talking like this eight years after JWL standards were created. 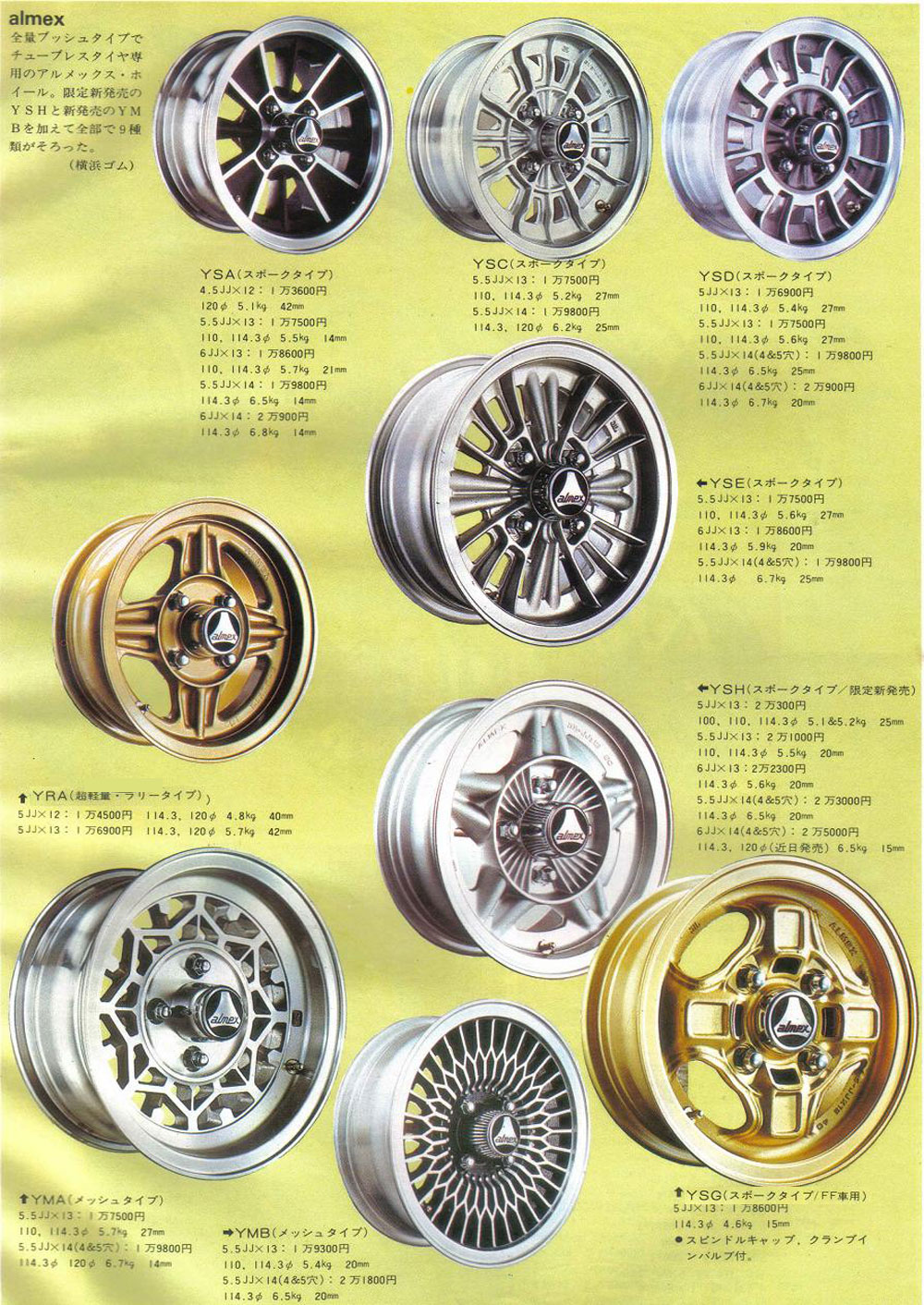 With gravity cast construction, the designs achievements of some are certainly impressive, but weights are not, even by the standards of the day.  For most models, narrow 14″ sizes are in the rand of 6.5kg.  That makes them more than 50% heavier than the real seventies lightweights.

Nevertheless, the wheels were picked up by other brands, both in OEM and aftermarket sectors.  The YSD, was used by Mazda on the Cosmo. Nitto Tire rebranded and sold the YMA, YSD and YSA for their Panther A line.

Today, none of the Almex wheels that I’m aware of fall into the ultra-rare or unobtainable category.  At the time of production, all models were priced quite economically… and as the first ad says, Yokohama even allowed buyers to finance their purchases.  Forty years later, they are still relatively abundant!

If any models stand out as being more rare than the rest, it might be these four.   Yet even here, weights and sizes that are far from performance oriented (even for the smallest cars today), result in a wheels that can now be found for ultra-affordable prices. That makes them a great choice for an older sedan or restoration product… especially for a Yokohama fan like myself.