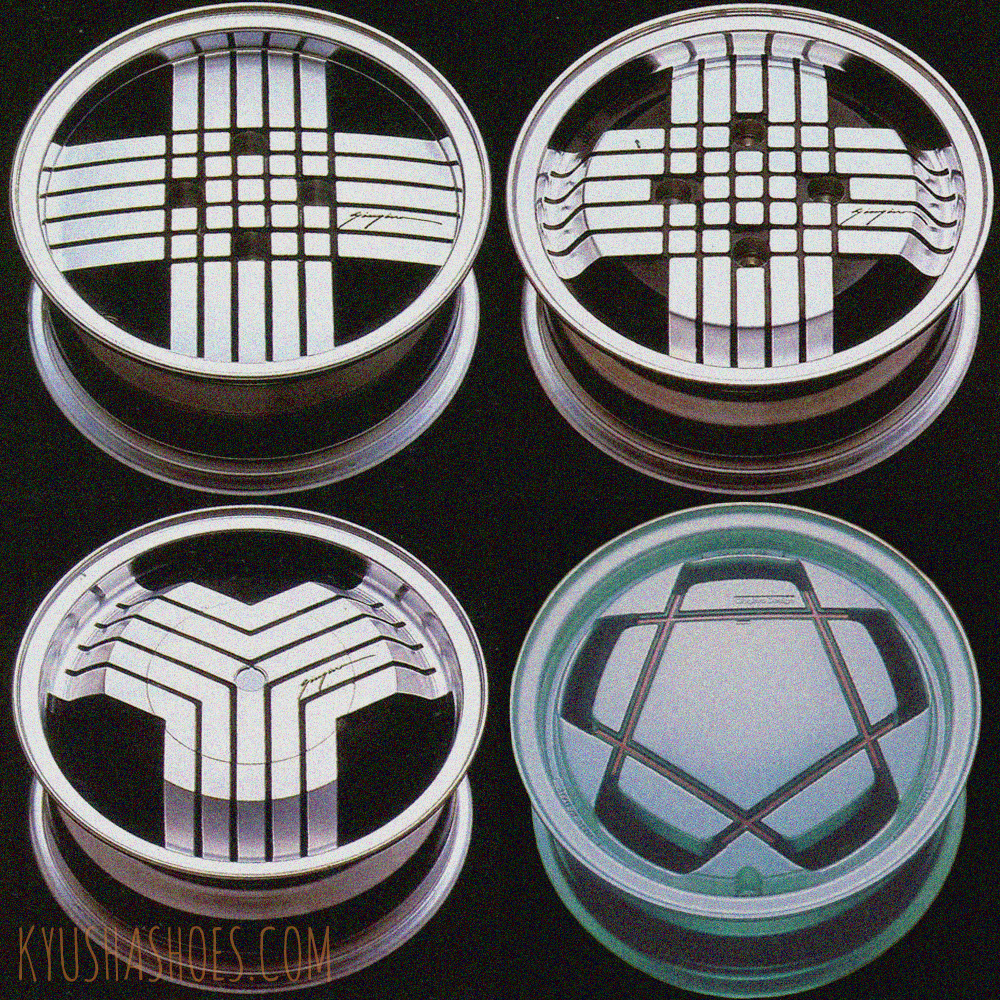 Vintage catalogs and reader submissions are great, but every once in a while we come across some really unique and interesting resources.  Someone recently advised me to check through old US Patents for vintage wheel design information.  With great excitement and hope, I dug in, did some research… and poured through literally thousands of archives.

I imagined that I would find documents for ground breaking wheel designs, like maybe the first ever three-piece wheel, or may ground-breaking forging techniques… but alas I discovered only that Honda has earnestly been trying (like in the last two decades) to re-invent the wheel.  Good on you Honda.  If I understood half of the patents that I came across with your name on them, I might try to write about them.  I don’t understand though, and I find the idea of where we’ve been much more interesting than the idea of where we are going anyways. 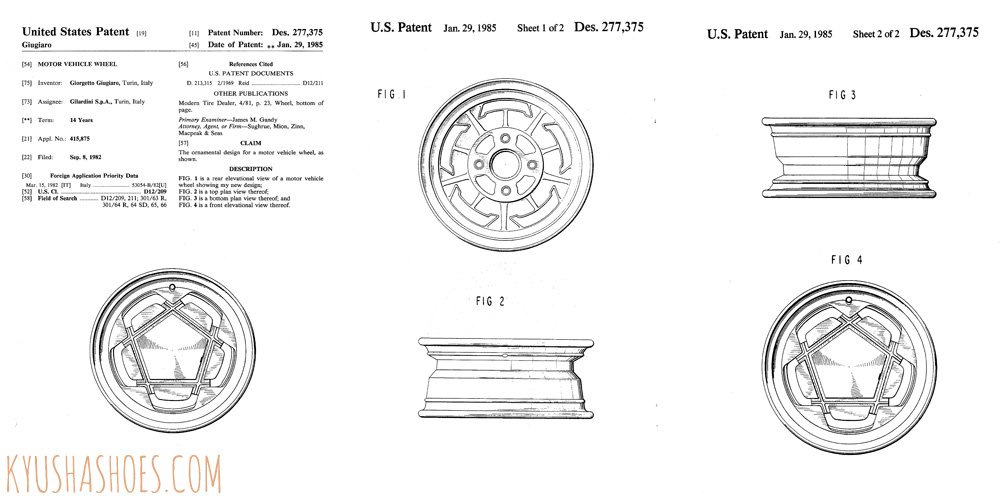 In reference to that, I found four patents of interest. They all came from Giorgetto Giugiaro – Car designer of the century, and recent inductee of the Automotive Hall of Fame.  Yes… Giugiaro did things the right way, both in design and business.  There are US Patents for all prominent Giugiaro inventions and designs: some wheels included.

The fat five spoke type wheel design above came from Giugiaro, and was assigned to Italian auto accessory company Gilardini S.p.A., later Magneti Morelli.  Cromodora looked after production, and also managed JWL/VIA certifications.  The wheel appears in Japanese catalogs as the Cromodora Type Giugiaro.  and was available for sale in Japan (and presumably the USA and Europe as well)  as early as 1981.  The application for this patent was made in September of 1982. 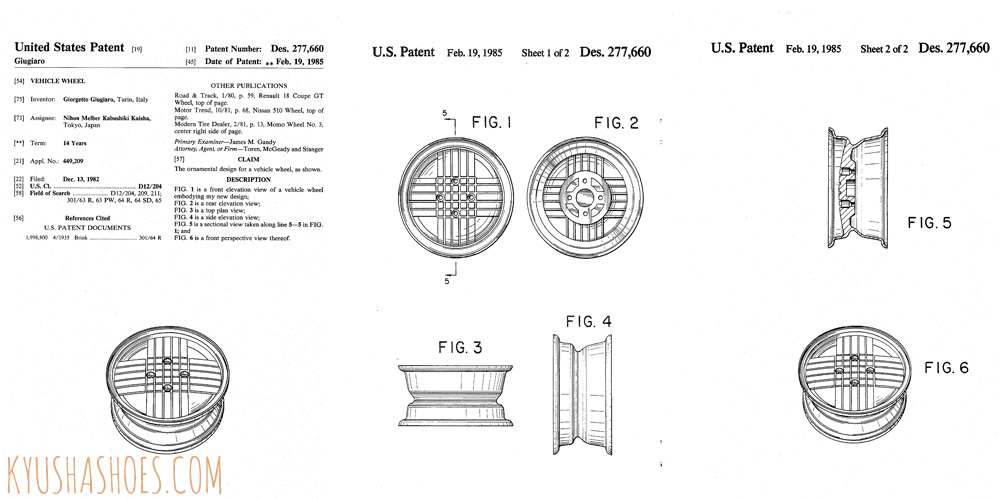 A couple of months after, Giugiaro filed for three more patents on wheel designs that are more familiar to us. The Melber Giugiaro Scacchiera SRG, was a design that debuted in 1977 at the Torino Motor Show.  Melber (aka Nihon Melber Kabushiki Kaisha) put the design into production immediately after. 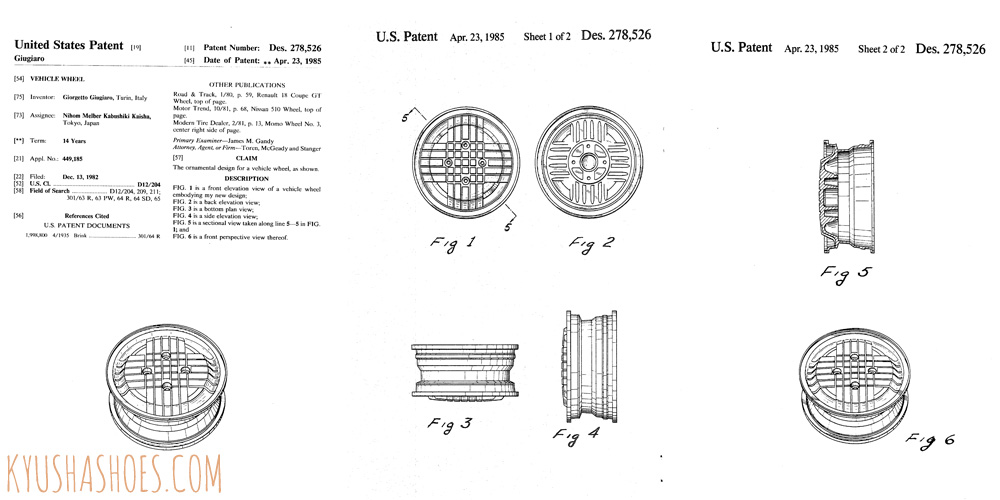 The Scacchiera SFF was a high offset version of the original Scacchiera, that was put into production in 1978. 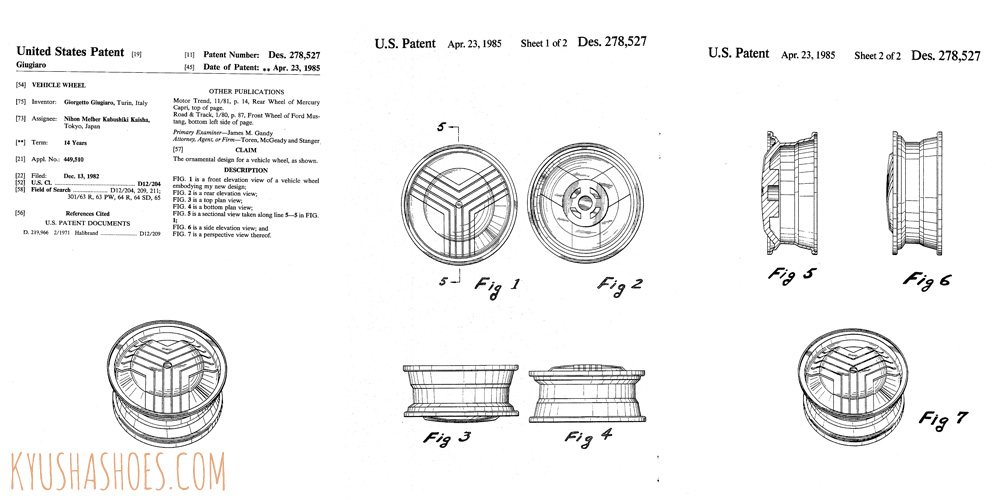 The Igrecca come after, debuting on the Japanese market in 1980.  The Scacchiera and Igrecca patents were filed on the same day in December of 1982 however – all assigned to Melber.

The information seen here isn’t new, but it is pretty cool to see official sketches and another confirmation of the relationship that Giugiaro had with Melber.    One can wonder why these four wheels, and not some of the many others that Giugiaro had his hands on, ended up with patents related to their design.  Perhaps it was part of prepping them for consumption in the US market in particular?

For me, the greatest disappointment now, is that Japanese Patent Law doesn’t seem to accommodate anything relating specifically to “ornamental design”, and instead focuses primarily on industrial processes and manufacturing techniques.  Looking through Japanese patents only turns up things like tooling processes from Topy, construction techniques from Bridgestone, or specific reinforcing ribs for casting process from Hitachi metals.

I guess this is probably a big clue as to why the JWL standards are what they are, but maybe also why Japanese manufacturers sometimes looked to guys like Giugiaro,Giovanni Michelotti, or Andre Courreges for design help.