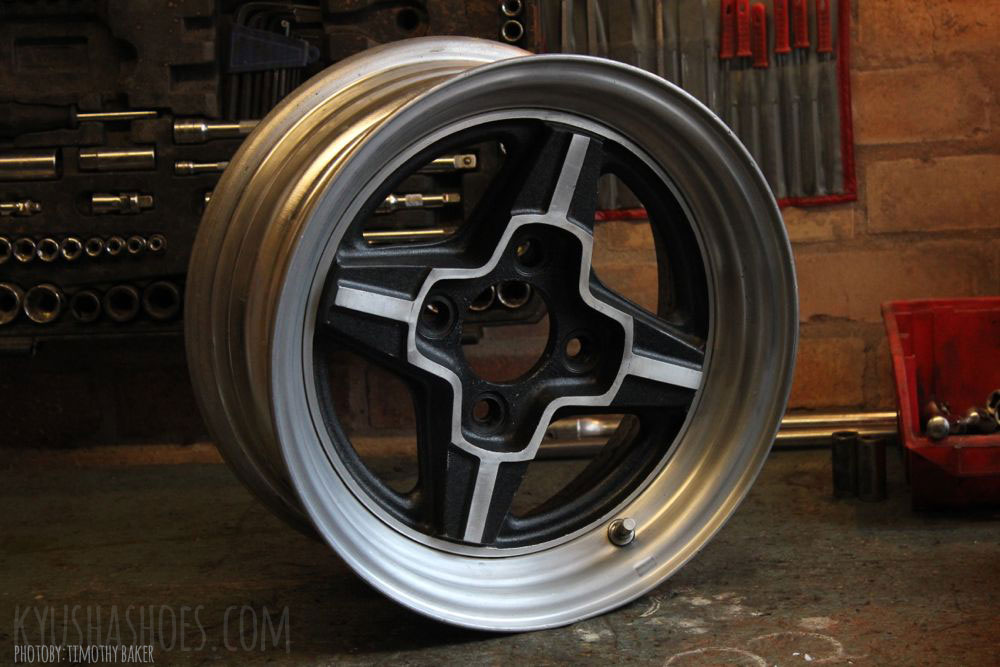 Debuting in 1977, the Xray was the fourth wheel produced by Rays Engineering.  Preceding it, was the now near unobtainable Volk Dish, and the more popular Volk 3-piece mesh and Volk II mesh. Like the Volk II mesh which also launched in 1977, the Xray used a two piece welded construction.  This may have been considered a thrifty move, in a period when assembly bolts were novel and fashionable. “The Wheels Forecasting The Future” was the tagline seen in advertisements.

In appearance, the Xray is unique from other Rays products of the era.  Thick spokes and a recessed PCD area that is highlighted by a raised polished edge might make it visually unattractive to some eyes, but for others that is part of the intrigue and appeal. Regardless of ones taste in looks, the Xray impresses in other areas.  Sizing options were reasonably aggressive, and weights are as minimal as any wheel of the time. 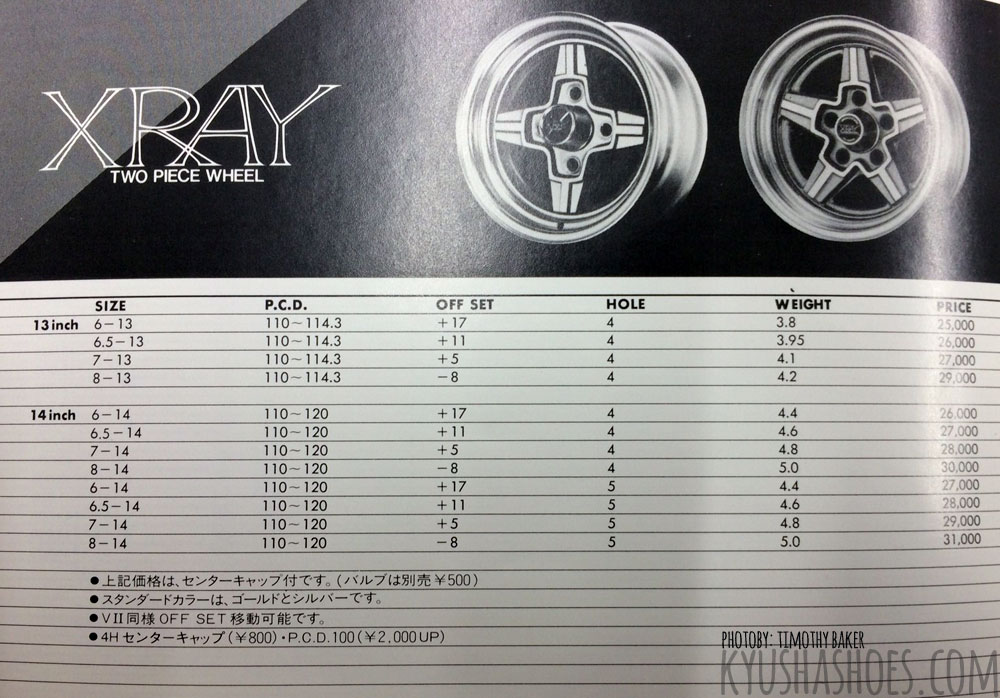 14 8J versions were an impressive 5.0kg!  Most competitors wheels were more than 1kg heavier in the identical size. As was popular at the time, 5H version of the wheel used slightly different designs.  In this case, an extra spoke to go with the extra hole.

This catalog gives us some idea of wheel purchasing options at the time.  Centre caps are very hard to come by nowadays. They were included in the box at the time though.  A metal valve stem is a 500 yen option.  Standard colours for this year of production were silver and gold.  That implies that custom colours are available.  I’ve seen many examples in black like the pictured wheel above submitted by reader Timothy Baker.  This was likely a standard colour at some point.

The second line from the bottom suggests custom offsets were available!? (I think that’s what it says but I’m not sure what VII refers to.)  With the centre disk simply welded to the shell custom offsets may have been as simple as welding in another place.  Finally, 4H PCD100 was available for only 2000 yen.  That seems like a helluva small price to pay considering the work involved nowadays to find old PCD100 wheels. 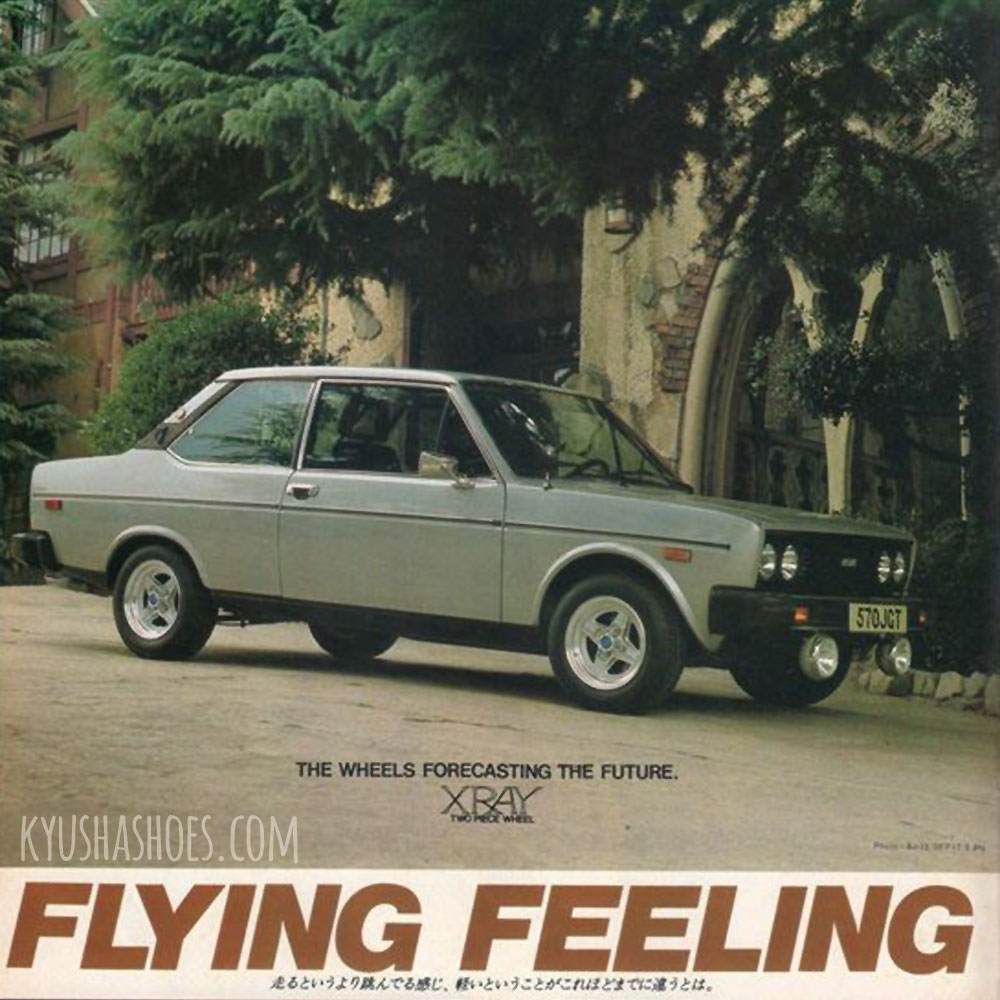 Production of the Xray continued from 1977 until at least 1984.  This is a reasonable span of time for a wheel, but given the very rare status of the Xray today, we can conclude that they probably weren’t overly popular back in the day. Today the wheel isn’t a highly sought after choice either, although maybe it should be.  Prices are often quite reasonable in comparison to other premium brand wheels, and sizing options plus low weight make them a good choice for someone looking for both real performance and kyusha style.

For Rays Engineering, perhaps the greatest legacy of the Xray, is that it was the first wheel to demonstrate the true benefit of bolt free construction.  Today, one piece wheel technology has allowed construction techniques to evolve, beyond cast and welded centres, but assembly bolts are still considered unnecessary weight, cost and complication.  In that sense, “Forecasting the Future” may have actually been a reality rather than a catchy tagline in an era where medical CT scans and X-rays were cutting edge!