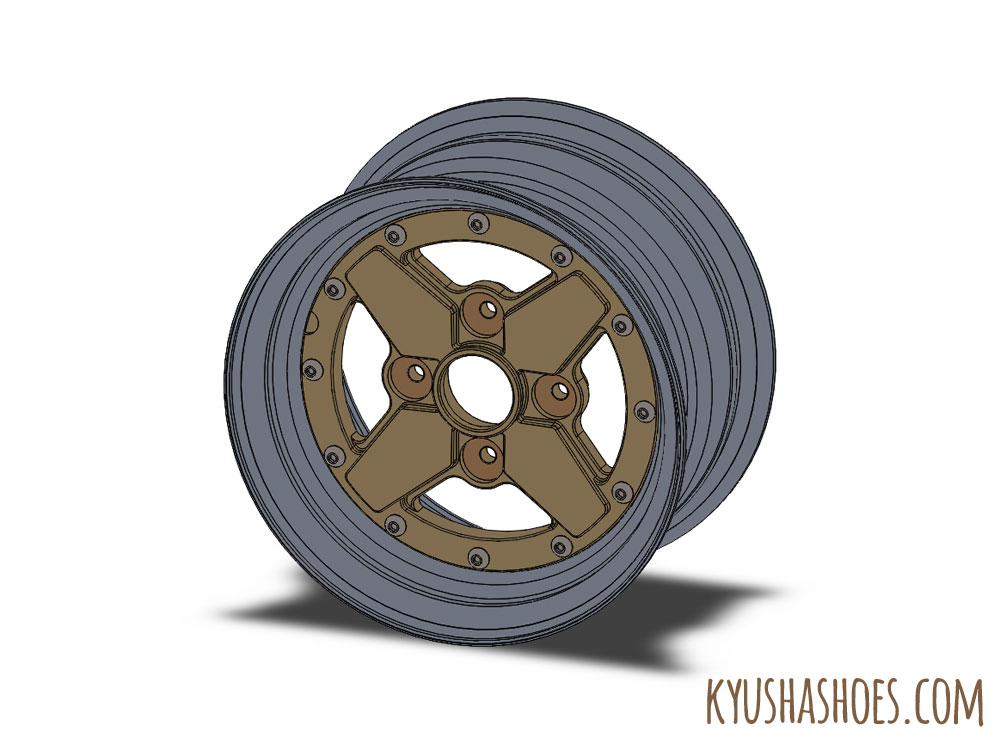 In other posts, if you aren’t sure what we mean by “hub pad” or you think we should say “rim” instead of “wheel,” this one is for you.  If you know wheels inside and out, then let’s just call this a list of Kyusha Shoes vocabulary. Because let’s face it – some people say “Dunlop TE-E”, and some people say “Dunrop TE-E”… and some people can’t even hear the difference! 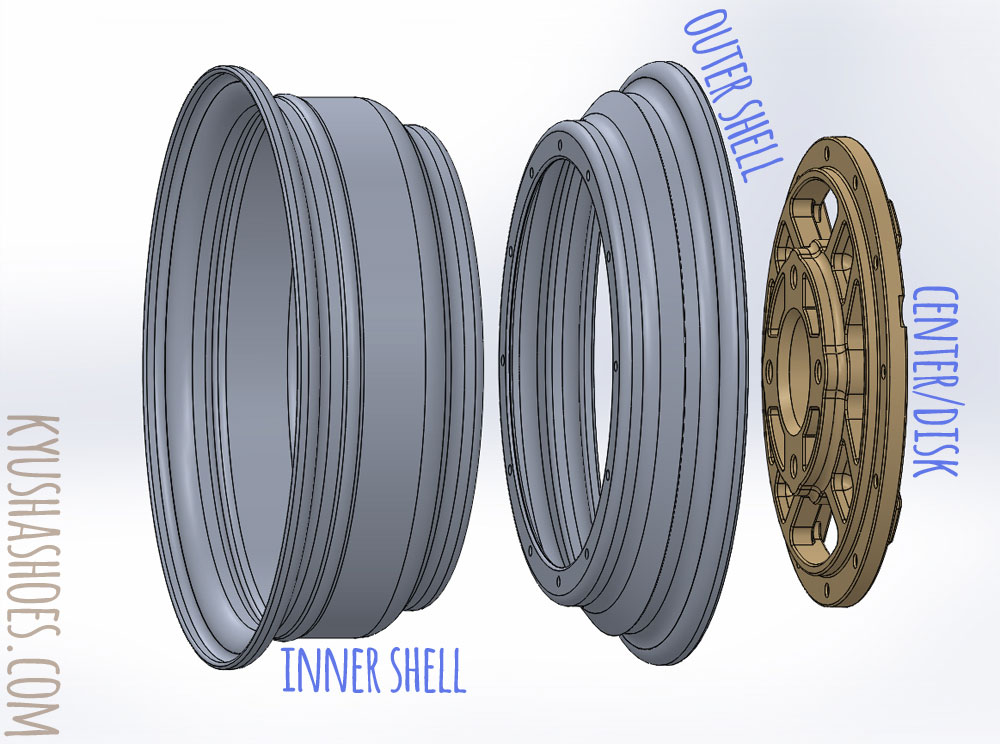 Pronunciation aside, this is what we would call a modular wheel.  It is composed of multiple parts.  A typical 3-piece wheel uses an inner-shell, an outer-shell, and a center or disk.  These three pieces are typically assembled using either bolts (yay!), welding (boo!), and often even use both.  The center section can be front-mounted (bolted on the outside face of the shells), sandwich mounted (in between the two shells) or even rear-mounted (on the inside of the inner shell).

That was exhausting… but as you see, not all 3-piece wheels are alike. A two-piece wheel typically uses a single shell section and separate center section.

ASSEMBLY BOLTS – used for fastening the center to the shell.  When a minimal number of bolts are used, the assembly is usually supplemented with weld.
CENTRE – also known as DISK. The wheel center connects the vehicle hub to the shell section.
SHELL – also known as barrel/rim.  The shell determines wheel diameter and width, and is the part of the wheel that interfaces directly with the tire. 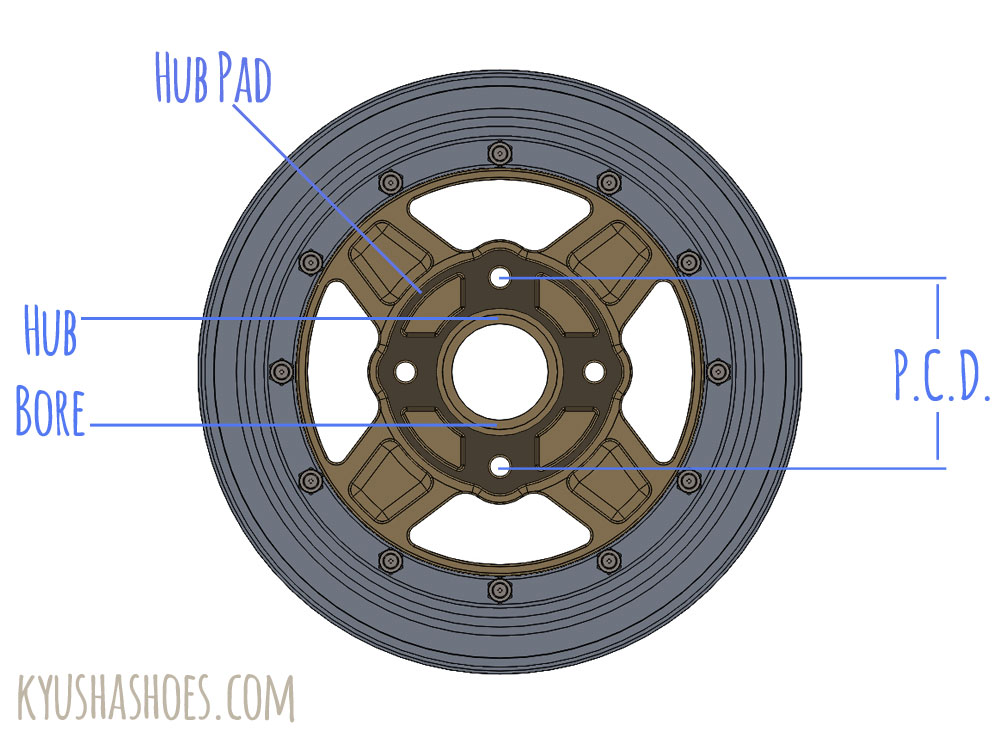 A wheel bolt pattern refers to the spacing of the studs and nuts (this is Japanese wheel life so we sure as hell don’t use bolts) on the vehicle’s hub used to fasten the wheel to the car.  If your car uses 4H PCD114.3 then you love this website because practically every wheel here could go on your car.  If your car uses 5H PCD100 then you cry yourself to sleep every night and spend a lot of time trying to imagine Kyusha Shoe designs with five holes.  5H means five holes.  P.C.D stands for Pitch Circle Diameter and is a measure of millimeters.  Save that 4×4.5″ talk for your local Pep Boys.

Hub bore refers to the diameter of the cylindrical cut out in the wheel center.  OEM wheels will be matched to the hub size of the car.  Aftermarket wheels typically use a big hub bore for universal fitment.  For Kyusha wheels, 73mm or 67mm is fairly common.  Buy plastic hub bore adapter spacers for OEM fitment if you are losing sleep at night.

Finally, the hub pad is the pictured area highlighted in darker bronze  This is the face of the wheel that is in contact with the vehicle hub.  Most are not completely flat, but have cut-outs in them as this Dunlop does.  We talk about wheel pads often here because they generally contain markings used for identifying wheel size, age, manufacturer etc.  Fun stuff.

HUB BORE –  cylindrical cutout in the center of the wheel disk for clearance of the vehicle’s hub assembly.
HUB PAD – the back face of the wheel that meshes with the vehicle hub.  Often contains the answers to all mystery or at least a map to world peace.
PCD – Pitch circle diameter.  Not the distance between wheel studs, but the diameter of the circle they are placed on. That’s twice the radius! 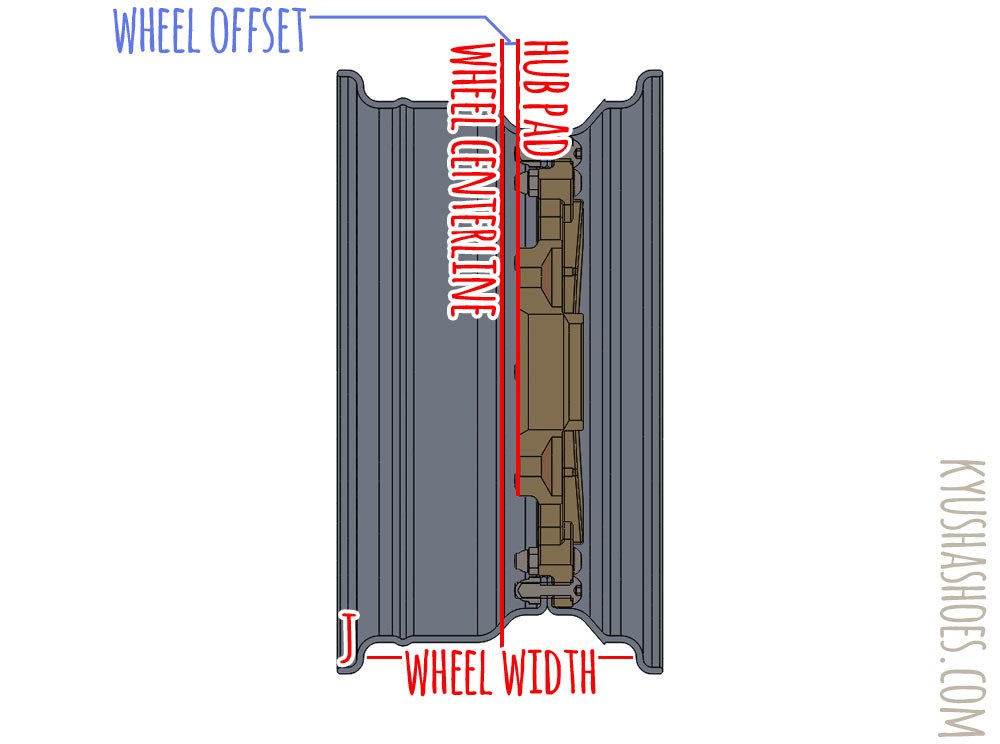 The lateral placement of the wheel pad is also the defining element of the wheel’s offset.  The distance between the center of the width of the wheel and the face of the hub pad is wheel offset.  A positive offset puts the hub pad outboard of the centerline.  A negative offset puts the hub pad inboard.  Offset is measured in millimeters.  Zee Germans originally coined the term ET (short for some German words that translate into insertion depth) to denote offset.  Japanese manufacturers picked that up sometime later, but the methods of measurement for offset and ET are identical. American companies often used “backspacing” as an alternative to offset.  This is the lateral measurement from the most inboard edge of the wheel shell to the hub pad. Backspacing is not used in countries where cars can turn right, and it is not used here.

While offset is measured in millimeters, width is most often a measure of inches.  Buy enough used wheels, and width measurement becomes a point of annoyance.  Wheel width is the distance between the inner edge of the shell flanges.  Lots of people tend to measure the total shell width and maybe, for example, sell 7J wheels as 8J wheels.  It’s a nice way of turning an OEM sized wheel into something worth a few more bucks… but not actually good for holding a wider tire or impressing a wheel buyer. AHEM!

As for the J? Admittedly, when I started using J for wheel width many years ago I thought it was some kind of abbreviation for width.  What J actually refers to is the shell flange profile/shape, and that is designed to give a specific shell to tire interface.  The J profile is most common in Japan, and on modular wheels world-wide.  The shape of the flange itself is similar to the shape of a “J”. The exact dimensions and radius are standardized and used by wheel and tire builders alike.

OFFSET – measures the lateral placement of the hub pad relative to the center of the wheel width.  Negative means dish.  Positive means maximum insertion depth! It’s so hard to choose…
WIDTH – the inside distance between shell flanges.  Unless you are desperate for cash.  Then stretch that tape out as far as it goes.
SHELL FLANGE – The section of the shell that meshes with the tire bead.  Most Kyusha Shoes use a J-shaped flange. 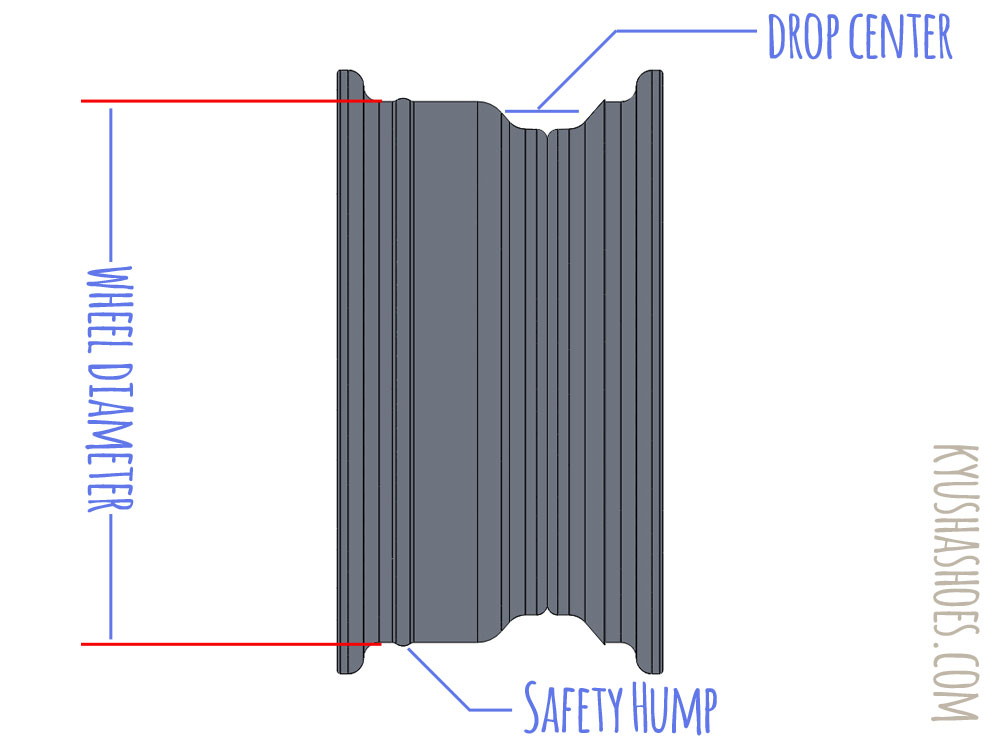 Looking closer at the shell section –  much like the width measurement, the wheel size/diameter is not the overall diameter of the shell, but the diameter of the tire bead seat.  Most non-race shells will have a safety hump to prevent the tire from unseating.  This Dunlop wheel has one rolled to regulated specs on the inner shell, and a spun one of different dimensions on the outer shell section.  The safety humps are an important feature and often indicated with stamped or cast markings.  H indicates a single hump.  “H2” is found on most wheels nowadays, and indicates both an inner and outer hump.

The drop center is an important feature to accommodate tire mounting and removal.  Thinking about wheel design, most wheels have the center disk mounted on or just slightly outboard of the shell drop center.  Reverse mounted wheels, like the SSR Reverse mesh, MKII-R, and many others, flip the shell around and mount the center disk to what would normally be the inner shell.  This often requires a number of design tweaks to both shell and center to accomplish but gives a unique look that some appreciate… and others don’t. (Nevermind big brake clearance!)

SAFETY HUMP – raised section on the shell to prevent the tire from un-seating.  Stampings H means one hump.  H2 means one on both inboard and outboard sides.
DROP CENTRE – a section on the wheel shell of smaller diameter than the tire bead seat. Used to enable tire mounting and dismounting. 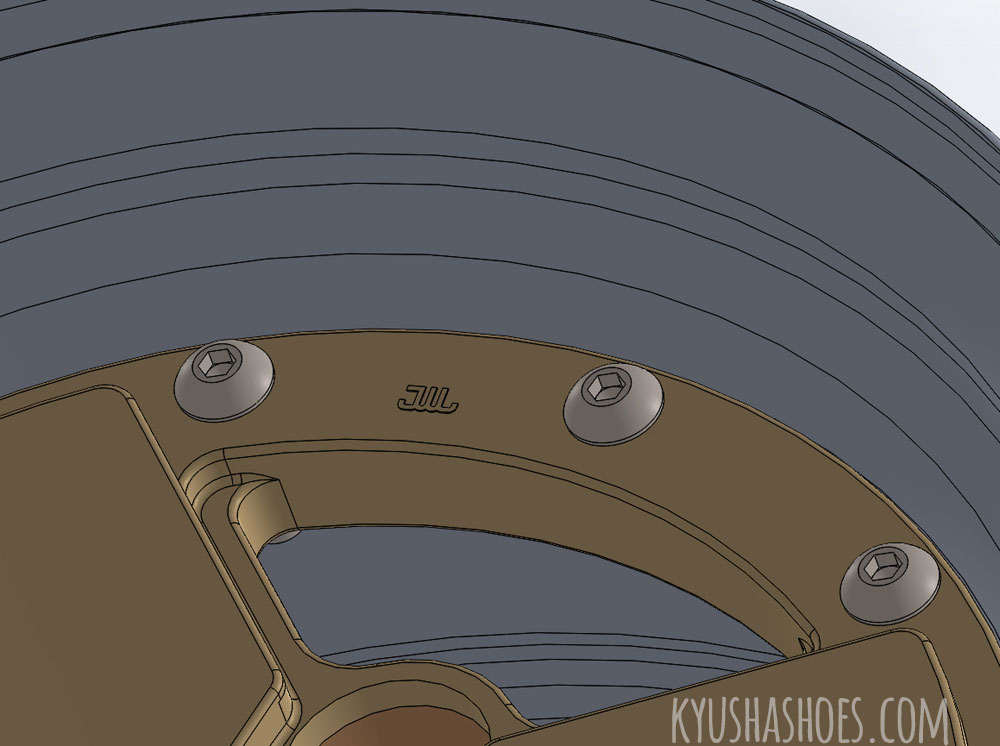 And I think I could go on and on, but that covers the questions I commonly hear.  Personally, I think this stuff is pretty interesting and would like to get into even more detail in the future.  I mentioned regulations and standards as well in this post… and much of that comes down to the “JWL” you see on ALL legit Kyusha Shoes.  The Japanese Wheel League (not what it stands for but what I affectionately call it) JWL marking is an emblem of Japan’s dominance in wheel building that strikes fear in all other wheel builders around the world.